I’ve been gone for a while because there’s been some pretty important stuff happening lately. Most importantly, I HAVE FINISHED MY DEGREE!

Yesterday I handed in my final essay and just like that my time as a UEA student is done. The night before I was in bed and I suddenly had a flashback to my first night at uni – lying in bed thinking about how this new important step of my life was just beginning. I can’t really quite believe that it’s over already!

To celebrate, my friends and I congregated in the square outside the SU and sunbathed, drank pimms, and generally enjoyed not having any deadlines to worry about. 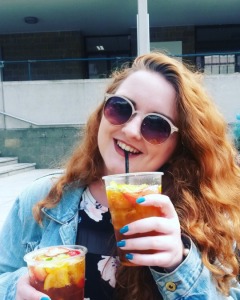 Because I’ve been working pretty hard over the past few weeks I’ve had to miss out on things like this year’s ‘Pimp My Barrow’ (see here for more info if you hadn’t heard of PMB before) but I was still able to swing by and see it for 10 minutes or so on my way to the library.

This was from ‘early’ in the day!

The next few weeks are going to be a race to do everything in Norwich that I’ve wanted to see/try but never gotten around to, such as the Plantation Gardens. It also alarms me how many of my Norwich Bucket List items involve trying different food establishments.

My tenancy ends in mid-June so I’ll be moving back home before graduation and then coming back for Grad Week; hopefully staying on the floor of a friend’s place as quite a few of them are staying in Norwich.

I’m a strange mixture of devastated to be leaving Norwich but also ready to go – and I’m still trying to understand how I can be both simultaneously. But this fine city has been very good to me so I am glad that with my friends staying here I will have good cause to return.

Last weekend saw the tenth anniversary of the one true UEA tradition – ‘Pimp My Barrow’.

‘Pimp My Barrow’ is an event really unlike any other and until you have seen it with your own eyes it is hard to really convey just how ridiculous and beloved it is.

However, I shall try and give a rough guide to the day’s proceedings:

It all begins with thousands of students in fancy dress, sporting decorated wheelbarrows, descending on the UEA campus square. The students are usually in teams of around 6 people and each team will pick a theme for their costumes and their wheelbarrow. Recent great designs have included ‘Only Fools and Horses’ and ‘Thomas the Tank Engine’ teams.

They even had smoke pellets to put in his funnel!

Somehow every year the weather is beautiful and this first part of the event is a chance to party in the sun with your friends and celebrate the end of another academic year.

The teams are then set off on their journeys in three separate waves to take part in a wheelbarrow race across Earlham Park and then on to a pub crawl through Norwich. What the locals make of the sight of all the students in their costumes I don’t know, but it is certainly a very interesting and ‘unique’ parade.

Whilst it is all lots of fun the main purpose of the event is to raise money for the local cancer charity, the Big C. This year ‘Pimp My Barrow’ raised over £9000 (or the cost of one year of university tuition) which I’m sure we can all agree is a fantastic achievement.

I had a great time again this year but it was strange to be doing it all again. Last year this was of course all new and exciting, now it feels like a strange count down to the inevitable day when I have to wave UEA goodbye. I suppose it just means we’ll have to put a special effort into ‘PMB 2K17’ and see it out in style.

Side note: We bumped into campus celebrity, ‘Cloud Dog’ aka Beau

More thoughts on the end of second year to follow, until then enjoy the good weather whilst it lasts!

UEA is a university with few traditions. We are relatively new on the scene compared to some universities and pride ourselves on our lack of stuffiness and formality. However, we do have two great occasions – Derby Day, and Pimp My Barrow, the second of which took place this Saturday.

What on earth does this involve you ask?

Well, as the name suggests, the pimping, or dressing up, of wheelbarrows is the main feature of the day, followed by a pub crawl through Norwich.

Teams congregate in the square from midday, dressed up in costumes such as Disney Villains and the Avengers – one of the prize winning barrows this year was done up to look like the van from ‘Only Fools and Horses’. We are then set off in waves throughout the afternoon, moving from pub to pub, and trying to not obstruct traffic.

The main purpose of the day is to raise money for Big C, a local cancer charity. However, as it falls at the end of the year it also functions as a mass letting off of steam. Hopefully the pictures in this post will convey something of the atmosphere on campus.

The standard of the costumes was very high and the dedication from some teams was astounding. As a university we also raised a lot of money, I believe the figure was somewhere near £10,000 but I can’t find the official statistics so please take that number with a pinch of salt. 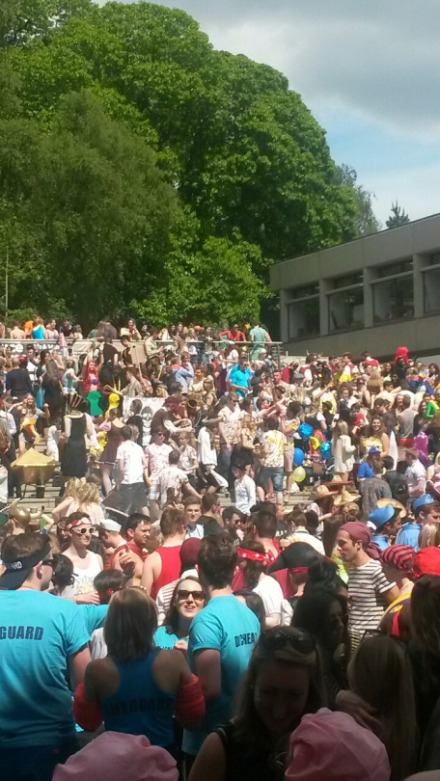 (Visit the UEA website for more photographs of the amazing costumes)

To anybody who wasn’t involved this year I would recommend trying to get tickets next year; with a good set of costumes and an even better set of friends, it’s a great laugh.

Although I’m still not sure why wheelbarrows are involved… 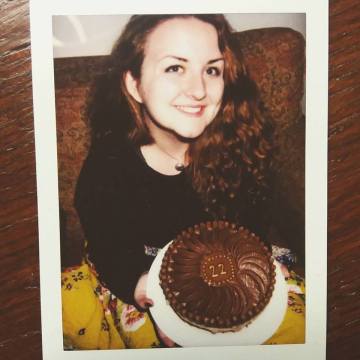