Finding a free moment as we approach the end of term is difficult, but occasionally it is worth setting aside your towering pile of work in favour of UEA’s own brand of extra-curricular activities.

Last week I finally went to an exhibition held at the Sainsbury Visual Arts Centre, something I have been meaning to do since the end of Freshers’ week last year. Their current exhibition is of the works of Alphonse Mucha, a Czech artist I remember doing a school project on in year five. Luckily I still enjoy his art and at only £3 it was very friendly to an end of term student budget.

For what is a fairly tucked away art gallery and museum, the Sainsbury Visual Arts Centre is regularly home to an impressive range of artists and their work. Earlier this year they played host to a series of sculptures by Henri Matisse (It is also famous for being the home of the Avengers in the latest Marvel films).

I enjoyed looking around the exhibition, particularly the posters Mucha created for the then famous actress Sarah Bernhardt, and I’ll be keeping an eye out to see what is being put on in the future. Whilst I’d recommend students to go and have a look anyway, it’s also the perfect sort of thing to take your parents to when they visit.

My other bit of culture last week was a talk at the cathedral given by UEA’s own Dr Rebecca Pinner. Dr. Pinner is one of the lecturers on my Medieval Literature module so Sam, one of my housemates who also happens to take the module, and myself decided to go along even though St. Edmund (the topic of the talk) predates any of the texts we are studying by quite a long way.

The event itself was held in the cathedral’s library (which now I know is open to the public I may go and explore some time) and it was amazing to see how many people turned up. The talk itself was on the topic of the imagery of St. Edmund around East Anglia – St. Edmund being a very local saint- and happened to coincide with his feast day. It’s probably not everyone’s cup of tea but I really enjoyed it and I’m sure that I’ll bore any friend or relative with it who happens to be in the cathedral with me next time I’m there.

These particular events might not be to everyone’s taste, but they’re just a tiny sample of the kind of events and opportunities that you can find in Norwich. If nothing else, it’s good to do something extracurricular which isn’t the LCR…

It goes without saying that over the last few days the world has been rocked by recent events in Paris.

Despite the fact that it was just one of a number of tragedies that occurred this weekend, for those of us living in places like the UK it is perhaps the most shocking, purely because it is so close to home. This is a flawed view of course, but it is far easier to be moved by such events when you know the streets in question, and have friends who live not far from them.

Yesterday, my friends Jonathan Hendry and Margot Terrini, both UEA students who hail from Paris, organised a memorial event in the square, in honour of all of those who lost their lives due to terrorist attacks over the weekend.

At 11 o’clock, UEA staff and students filled the square, lining the steps and the balconies to join together in a minute’s silence. Words such as solidarity and unity have been thrown around a lot recently, but seeing so many people coming together with a shared purpose gave us just a taste of what that could be like.

This is the speech that Jonathan and Margot read:

“These last few days have been very intense for a lot of us. On Friday 13th November, terrorists spilt blood in Paris: The city of Love. The city of Lights. Our City. A city that you may know as, amongst other things, a wonderful place for a romantic or family holiday, a city of impressive monuments and delicious food, of cultural diversity: a symbol of what terrorist aim to destroy.
The victims of these terrorist attacks were people like you and me, people who wanted to enjoy life: To have a drink at a bar, a snack in a fast food, to watch a football match, to go and see their favourite band.

All of us who come from Paris know the locations of the attacks, by name or by having actually been there. Many of us know people who were very close by when the attacks took place, and it is with extreme sadness and fear that we followed the news on Friday night, as the tragic events unfolded.

Any of them could have been among the victims.

As Friday evening went on we received messages, made phone calls and progressively found out that our friends and family were alright. Unfortunately, many weren’t as lucky as we were. People have lost their parents, their children, their friends – and today our thoughts go out to them and all the victims.

As we continue to take in the barbarity of these events, many people are struggling to explain them to their children, and to find the right words: The truth is, there are no right words. But what we should remember is that we are lucky to be able to explain this to our kids. In other places, other countries, there is no explaining to do: terrorism is everywhere, every day.
So this is what it comes down to: what do we want future generations to read in their history books in five, ten, twenty years from now? Very soon – in fact it has already started, some people will start to point fingers. At the Muslim community, at refugees. Their hatred is what terrorists want. Because hatred divides, when what we need is unity.
There have been some beautiful reactions, in Paris – where people bravely helped each-other while the attacks were going on – and all over the world: people have lit candles, they have showed their support through media, and in a few minutes we will join together in one minute of silence. Solidarity is spreading throughout the world and it is what makes us stand strong against terrorism; for Lebanon, for Paris, and for everywhere else. And that’s what we want to see in the history books.

Seeing all of you here makes us as proud as ever to be French; and, above all, proud to be citizens of the world.”

After the minute’s silence there was a performance of John Lennon’s ‘Imagine’, a song which has been adopted by Parisians since the Charlie Hebdo attacks last January, and a speech from one of the members of the Campus Kitchen staff. Sadly I don’t know his name, but it was beautiful and moving (please forgive the clichés) and it was wonderful to see not only students coming together, but the staff of UEA as well.

I don’t have anything particularly original to say on this topic because it has all already been said, by people far wiser or more affected than myself. My only hope for this post is to document this poignant event, and to remind any readers that in these divisive times, more people than you can imagine are ready to come together to stand in unity, and we would do well not to forget that. 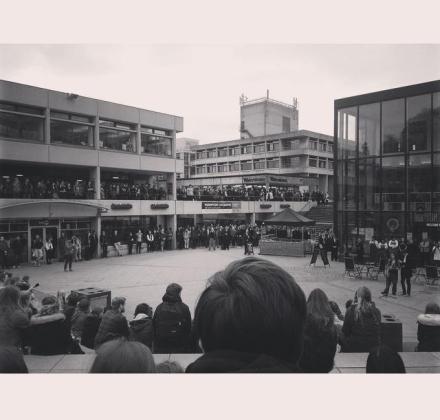 Reading weeks are usually associated with rest and recuperation, they’re times to reflect on the first half of a term and get a head start on the next couple of week’s reading. Unless of course it’s the show week of the first play you’ve ever directed.

As one of the directors of the show I am of course very excited, but with my Drama Society Equality and Diversity officer hat on, I am extra excited as we are having our Friday performance interpreted by the UEA BSL (British Sign Language) Society.

This is a great chance for UEA Drama Society to live up to our mission statement of making theatre accessible to everyone, and hopefully it’s only the start. 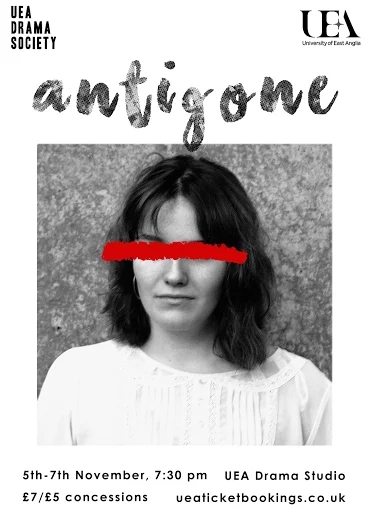 The rehearsal process itself has been equal parts pleasure and pain. Sam (my co-director) and I have been truly blessed with a fantastic cast who have continuously impressed us with their talent and commitment, and for that we will be eternally grateful. But, what we hadn’t quite appreciated at the outset of this adventure, was just how much of your time directing a show takes up – the answer is, a lot.

Whilst I don’t regret taking on this challenge, I’m very aware of how much catching up awaits me once the show is over. Reading weeks are supposed to be used for reading, not directing.

Ah well, you live and you learn. 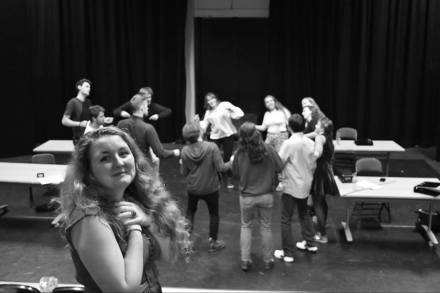